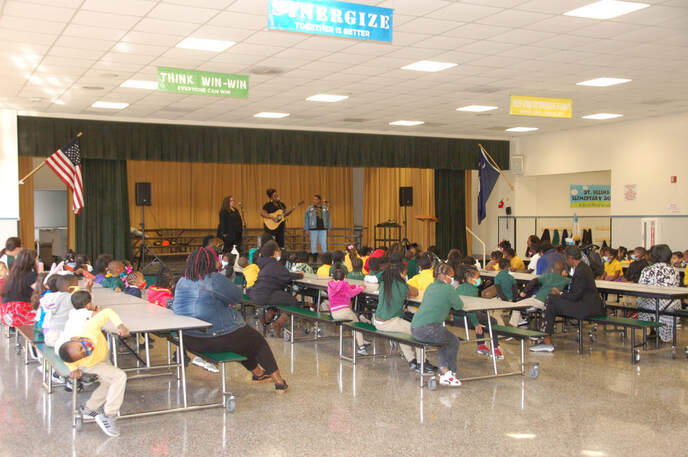 Fingers were snapping, hands were clapping, toes were tapping, and feet were stamping as Kyshona Armstrong, Nickie Conley, and Maureen Murphy (the Kyshona Trio) delighted the young Panthers of St. Helena Elementary School (SHES) on Monday, March 28. Sitting in the cafeteria beneath the hanging banners displaying the 8 Habits of a Successful Leader, the youngsters were enraptured by Kyshona’s upbeat songs with their positive and encouraging lyrics. And they eagerly raised their hands when asked to name specific administrators or teachers or to state one of the eight leadership habits. Of course, the guitar pics, “Listen” hats, and CDs that the Trio gave out as prizes for correct answers didn’t dampen the kids’ enthusiasm!
In addition to two FIFOM Board members, four other Frippers attended the morning concert, where they were treated to some new songs geared to the young audience as well as several songs from the concert the evening before, including “Burdens Down,” “Cleft of the Rock,” and “Listen.”
​One of those Frippers, Don Aldrich, has a very special connection to the school, as his wife, Hildy, taught and volunteered there for many years. The Hildy Aldrich Memorial Fund was established in her memory to provide grants to SHES music teachers.