"The goal of the organization was to provide an annual concert series for the cultural enrichment of the area and to encourage young musical artists at critical points in their career," said Muriel Horowitz, publicity co-chairman. Jenny Reese, President said, "With good music far away and many people on Fripp not wanting to drive late at night, and young musicians beginning their careers needing appreciation, it was a simple matter of bringing the two together." Of course this takes hard work. Grants were applied for, articles of incorporation written, by-laws drawn up, and concert artists were chosen by the selection committee. The hospitality committee prepares for each concert and receptions afterwards. The publicity committee contacts newspapers, radio and sends mail-outs. Executive meetings are held at the firehouse monthly. Future goals include establishing a scholarship fund for young artists to pay for part of their education. 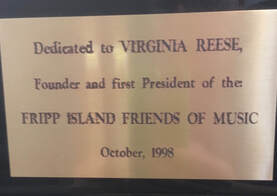 ​The piano at the Fripp Island Community Center Chapel, used by our performers, is dedicated to Virginia Reese, our founder and first President.

Take look back at the entertaining concerts we brought to you in the past.